Some of the most expensive baseball cards on the market are going to run you HUNDREDS OF THOUSANDS of dollars.

Think about that for a second.

You are able to spend as much money as a piece of cardboard with a person’s face printed on it as you can an entire house. Or multiple cars. Or college tuition.

So, whoever says that baseball cards are no longer valuable is completely wrong. There is still a thriving marketplace for the right kind of cards.

That being said: the most expensive baseball card are, typically, going to be the old ones. The late 1980s and early 1990s saw a massive printing run of mostly useless cards, thus all but killing the value of most baseball cards from the 1980s and on.

So, if you were willing to drop the price of a mortgage on a baseball card right this moment, what are the most expensive baseball cards you could buy?

Please note that this lists only includes those cards you can seriously purchase right now. Otherwise, you would see, for example, the T206 White Border Honus Wagner on top of the list (with only 50 known copies in the world, the card typically trades hands for well over $1 million). 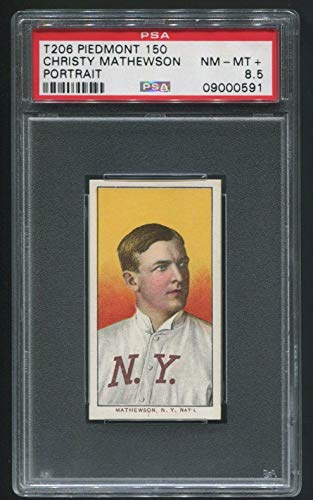 The T206 set is one of the most famous card prints in baseball history, as it features baseball’s best pitchers. Christy Mathewson, the Christian Gentleman, won 30 or more games with a career-high of 37 in 1908. He achieved much of his success with the use of a speciality pitch that is most like a modern day screwball. With a career ERA of 2.13, it is clear that the pitch was difficult to hit. The White Cap variation of this card is considered to be the most difficult of the three Mathewson card, but the Portrait remains the most popular. Further, this specific print is the most difficult HOF portrait to find in the entire set.

This is, by far, one of Mickey Mantle’s most attractive and sought after cards. His 1956 season is a thing of legend. He won the Triple Crown by leading the league with a .353 batting average, 52 homeruns, and 130 RBIs. He also led the league with 132 runs scored. There are two variations of this card. One has a white back and the other has a grey back. The white back versions are tougher to locate and, thus, sell at a higher price. As well, it is becoming more difficult to find a version of this card that is perfectly centered – most have severe rough-cute now. However, this has not lessened the technical grade or worth of the card.

The T206 Eddie Plank card is not only the set’s second most valuable card, but is also – without a doubt – the second rarest and most valuable card behind the T206 Wagner (which are, like, 99.9% impossible to find). The T206 Plank card was printed in the first and second run of a three-run set for the T206 series. Because of this, it is estimated that there should be only 100 or so versions of this card floating around.

Considered to be one of the greatest catchers to ever play the game, Johnny Bench led the Cincinnati Reds to back-to-back World Series titles in 1975 and 1976. In 1968, he hit .275 with 15 HRs and 82 RBIs to win the NL Rookie of the Year Award while also posting a .991 fielding percentage and 47% caught stealing percentage, enough to win him a Rawlings Golden Glove. Elected to the Baseball Hall of Fame in 1989, Bench has remained active in sports a as a Senior PGA Tour Player.

In 1968, Nolan Ryan made his Topps card debut (#177) sharing it with Jerry Koosman. During the same year, three other versions of the card were produced: a Milton Bradley, a O-Pee-Chee, and a Venezuelan. The Venezuelan versions has proven to be the most difficult to locate and purchase.