When a team loses 101 games like the Pittsburgh Pirates did in 2021, there will be no shortage of holes to fix if they look upon improving the following season.

One of the key priorities for the Ben Cherington and company will be to bolster one of the worst rotations in the major’s last season. Only Baltimore Orioles’ starters owned a worse ERA than the Pirates, and Pittsburgh’s rotation pitched the fourth fewest innings and had the sixth lowest strikeout output.

So, finding bodies to fill those innings was going to be huge this offseason.

While the pending signing of Jose Quintana isn’t going to solve the issues, it is potentially a step in the right direction.

It also begs the question, where exactly does the Pirates rotation stand after their first major league free agent signing of the offseason?

Quintana has played most of his career, all of it up to last year as a matter of fact, in the city of Chicago. He started out with the White Sox before moving on to the Cubs in a trade that saw Eloy Jimenez and Dylan Cease, among others, head to the south side of Chicago.

Last year Quintana pitched for both the Los Angeles Angels and San Francisco Giants, posting a 6.43 ERA (4.07 FIP) in 63 innings across 29 appearances – 10 starts. The move to the bullpen allowed his strikeout percentage to see a major climb (28.6%).

With Quintana getting a major league deal, it would be safe to say that he is as good a lock to make the Opening Day rotation, but who else may follow him?

There are four players that seem to be the favorites to land a rotation start out of the gate, although none really pitched themselves into a guaranteed spot in 2021.

Bryse Wilson came by way of a trade with the Atlanta Braves that saw Richard Rodriguez head to the eventual World Series Champions. The righty is a sinker baller that induces a lot of ground balls but doesn’t miss a lot of bats. In 16-starts between the Braves and Pirates, Wilson posted a 3-7 record with a 4.98 ERA while striking out less than six batters per nine innings.

Another player that came to the organization by way of a trade, Wil Crowe started the most games for the Pirates last year and although it wasn’t always pretty the former Washington National farmhand was a willing competitor each time he toed the rubber.

While he might project better as a reliever long term, the fact he made 25 starts last season may give him an edge against the rest of the competition.

While Crowe made the most starts last year, JT Brubaker finished with the most innings pitched in 2021 for the Pirates. He finished the year on the injured list, as he saw a major increase in his workload from the years prior, and management wanted to save his arm.

There’s a lot to like about Brubaker’s game, and just one thing held him back last year – the home run ball.

Brubaker allowed 28 home runs last year across his 124 1/3 innings in 2021 which was enough to inflate his ERA to a 5.36. His breaking pitches metrics grade out high when it comes to generating swing and misses, but down the stretch fatigue got to him and some of those pitches started to hit too much of the plate.

Looking at some of the underlying numbers, Brubaker did move his strikeout and walk percentage in the right direction from 2020 to 2021. His K% jumped ever so slightly while he shaved a little more than a point off his BB%.

Keeping the ball in the park will play a big part in establishing Brubaker as a starter, or if he becomes one of the first candidates to slide to the bullpen.

The last of the favorites to find themselves in the rotation to start the year is Mitch Keller. The former top pitching prospect for the Pirates faced a make-or-break season in 2021 but came away with less than stellar numbers. Keller finished with a 5-11 record to go along with a 6.17 ERA and a 4.30 FIP. He struck out nearly 20% of the batters he faced, but still struggled with control (10.4 BB%).

If there is any positive to find out of everything, Keller posted a 4.90 ERA in September, the lowest output he registered in any month he made multiple appearances (had a 3.00 ERA in his one October outing).

After that, the Pirates have some players they can put in the bullpen that have the experience to be versatile options. Chad Kuhl didn’t perform great out of the bullpen after coming back from having COVID-19 and as an arbitration eligible player projected to make close to $3 million, there is no guarantee he returns.

Same with Steven Brault, mainly due to him not being able to stay healthy. The Pirates may not want to invest in the lefty as a starter anymore, as they had a hard enough time filling the innings throughout the season.

Dillon Peters was brought in from the Los Angeles Angels last year and filled in admirably, putting together a good stretch of starts that may allow him to get another look in 2022. In the end he may be another option to bring out the bullpen.

Max Kranick threw five perfect innings in his debut but got beat up for the most part after that and Miguel Yajure and Roansy Contreras are two prospects expected to push for time in 2022.

Both made their way to Pittsburgh in the Jameson Taillon trade and started for the Pirates at some point in the season.

Contreras was one of the breakout prospects in 2021 and while he missed time to a forearm strain, he pitched good enough that he was able to make his major league debut as well. Depending on what unfolds with the CBA and any changes to service time, you can expect Contreras to start in triple-A for additional seasoning.

Signing Quintana is a start for the Pirates, and while they will start to look to move some of the younger players in the minors into major league roles, for the sake of being able to finish out 2022 Cherington still may be in the market for a starter for depth sake. 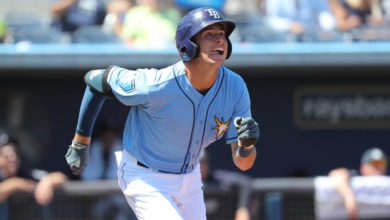