The New York Yankees have started their 2022 campaign, tying their franchise sixth-best record through 55 games, with an outstanding record of 40-15. It’s hard to think that a team with that great of a record could have holes. However, there is always room for improvement and there are a few holes that are quite noticeable. The Yankees outfield is a bit thin with the slumps of Joey Gallo and Aaron Hicks. Yankee fans believed giving Joey Gallo a full season in pinstripes, he could finally turn it around. That has not been the case. The same goes for Aaron Hicks who is coming off of missing most of the 2021 season.

The Yankees starting rotation has been better than anyone could have expected. They are arguably the best in baseball. Led by Gerrit Cole and Nestor Cortes Jr., the rotation has a league-leading 2.87 ERA. They have been a powerhouse and show no signs of slowing down. However, there is never enough pitching. As the old adage goes, pitching wins championships.

The Yankees bullpen has been no different than the starting rotation. Led by Clay Holmes and Michael King, Boone can feel safe bringing in any reliever and feel like he made the right decision. However, Aroldis Chapman, Jonathan Loaisiga, and Chad Green all went down with injuries and has weakened the Yankee pen.

Andrew Benintendi has had a great start to the 2022 season. With the Royals not being a competitive team this season, they may look to move Benintendi. With the Yankees outfield underperforming outside of Aaron Judge and Giancarlo Stanton, the addition of Benintendi could work wonders for the Bombers outfield. His lefty bat and his .320 BA on the year is a perfect fit for the short porch at Yankee Stadium. His above-average defense would be a huge help as well.

Stated above, the Yankees rotation has been on a historic run. However, nobody knows if that will continue. Adding another arm would put this rotation above and beyond. Especially a starting pitcher of Luis Castillo’s caliber. Castillo has been off to a slow start but with the help of Matt Blake, he has a high chance of turning it around and being a huge addition to this Yankees staff. With Domingo German coming back from injury shortly, having him as a swingman between the staff and the pen would give the Yankees rotation some deep depth and with the addition of Castillo, that’s what would happen.

Whenever the Yankees are mentioned in trades with the Pirates, it’s been huge for the Bombers. Names such as Clay Holmes and Jameson Taillon come to mind who have been excellent for the Yankees. David Bednar would be no different. With the Yankees bullpen weakened until key relievers come back from injury, Bednar would be an outstanding addition. Bednar is running with a 1.33 ERA and 10 SV in 27 IP. The addition of Bednar to this bullpen would truly solidify the pen and give Boone even more options. 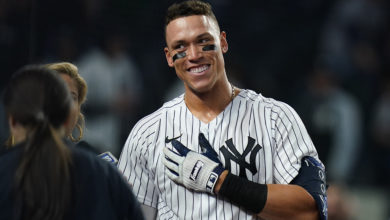 Aaron Judge Is Off To An Unbelievable 2022 Campaign