Game seven of the 1960 World Series, played at old Forbes Field between the Pittsburgh Pirates and New York Yankees, has been called the greatest baseball game ever played. This Wednesday, as they do every year on the October 13 anniversary, a few hundred Pirates fans will gather at what remains of the outfield wall at Forbes Field to commemorate the game.

Game seven is the only World Series game where nobody on either team struck out. It had the feel of a fierce boxing match where the last man standing would win. The Yankees led, 7-4, heading into the bottom of the eighth inning. Then began a series of bizarre events not even a Hollywood script writer could dream up.

Pinch hitter Cimoli led off with a single against Yankees pitcher Bobby Shantz. The next batter, Bill Virdon, hit a sharp grounder to shortstop Tony Kubek, a sure double play ball. But the ball took a bad hop and struck Kubek in the Adam’s apple. Both runners were safe as Kubek lay on the ground. When play resumed, Dick Groat singled to drive in Cimoli and knock Shantz from the game. With Jim Coates on the mound, a sacrifice bunt and a harmless fly out ensued. It looked like the Yankees might escape with the lead.

Roberto Clemente then hit a weak bounding ball between the mound and first base. Coates took a circuitous route to first base, seemingly unsure of whether to field the ball or cover the bag. In the end, he did neither and Clemente was safe as Virdon scored to bring the Pirates within a run. Next up, Hal Smith, a backup catcher in the game only because Smoky Burgess was removed for a pinch runner earlier, smacked a long home run to put the Pirates ahead, 9-7. Over loud cheers, radio broadcaster Chuck Thompson told his audience, “Forbes Field at this moment is an outdoor insane asylum!”

The Yankees roared back to tie the game in the top of the ninth. With one out and the score 9-8, Gil McDougald on third and Mickey Mantle on first, Yogi Berra scorched a grounder behind first base. Rocky Nelson gloved it, stepped on the base and turned to throw to second to get Mantle for a double play before the run scored. But Mantle was no longer forced to go to second. He dove back to first safely as McDougald touched home with the tying run.

One of the many things making baseball great is anybody can be, in the words of David Bowie, “a hero just for one day.” This time it was the Pirates’ Bill Mazeroski, who led off the bottom of the ninth against Ralph Terry with a home run over the left field wall to win the game, 10-9.

The Yankees did not react well to this defeat. It was the only time Mantle was seen crying after a loss. The team was said to be furious with Coates for not covering first base in time to retire Clemente.

Yankees manager Casey Stengel “resigned” after the 1960 Series. He later said he was fired for turning 70, adding, “I’ll never make that mistake again.” Stengel faced heavy criticism for not lining up his rotation so Whitey Ford could start three games. Ford had pitched shutouts in games three and six. The conventional wisdom was had he been given three starts, the Yankees would have been champions. But the previous time the Yankees were in the Series, in 1958 vs. the Milwaukee Braves, Ford started three games, pitched only 15 and one-third innings and surrendered eight runs. His 0-1 record for that Series would have been worse if not for his team’s come-from-behind capabilities. Perhaps Stengel thought about that when setting up his rotation for the 1960 Series.

The most meaningful championship

Full disclosure #1: I’m a 63-year-old, lifelong Pittsburgh resident and Pirates fan. I may refer to Pittsburgh as “here” and the people of Pittsburgh as “we” or “us” to make for easier reading.

In 1979, Pittsburgh would become known as the City of Champions. We experienced a remarkable run here from 1968-80. That period included four Super Bowl victories, two World Series championships, a college football national title and the first ABA championship.

But Pittsburgh was certainly no City of Champions in 1960. The city’s last professional sports championship was 35 years earlier, when the Pirates won the World Series over Walter Johnson and the Washington Senators. In between, the Pirates and Steelers were mostly a joke and there was no major league hockey or basketball here. Probably no championship meant more to us than the 1960 championship.

The part of The Wall still standing starts near the 457-foot marker in center field and extends toward right-center field past the 436-foot marker. The flag pole stands in its original spot in deep center. Ivy is still on the wall as in the old days. It’s mind-blowing to realize you’re walking on grounds where Clemente, Paul Waner, Mantle, Hank Aaron, Willie Mays, Stan Musial, Babe Ruth, Ty Cobb, Roger Maris and Carl Furillo, among others, once walked.

The University of Pittsburgh had owned Forbes Field and leased it to the Pirates since 1958. Why didn’t Pitt tear The Wall down with the rest of the ballpark when the Pirates moved? Well, when Pirates owner Barney Dreyfuss built Forbes Field in 1909, he had a bad survey. Part of his ballpark was built on Schenley Park, public land he didn’t own. The city officials let it slide. After all, it was a small piece of land relative to the expansive park. There was no reason to have Dreyfuss tear anything down and start over. When Pitt demolished the old ballpark in 1970, it had no legal right to subject what it didn’t own to the wrecking ball.

At The Wall with Saul

Fast forward to 1992. Local author Jim O’Brien was conducting a book signing where he was also gathering stories for his next book, Maz and the ’60 Bucs. A man named Saul Finkelstein approached O’Brien with his story. Every year since 1985, said Finkelstein, he had gone to The Wall on October 13 and listened to a tape of the original radio broadcast to coincide with the actual time of the game.

O’Brien printed the story in his book, which was published in 1993. I had thoughts of joining Finkelstein that year but those plans were happily thwarted by the birth of my youngest child on October 11. I showed up in 1994, surprised to find around 30 other people who read O’Brien’s book and had the same idea. We listened to the game on a small boom box. It has since grown and I have been attending every year without fail.

It started as an informal gathering. O’Brien soon began organizing the event and was responsible for the large crowds and the many former Pirates who attended. Today six men who call themselves The Game 7 Gang organize the event. (Full disclosure #2: I’m one of them. The others: Herb Soltman, George Skornickel, John Urso, Dan Schultz and Steve Neumeyer.) With no advertising or sponsors, 300-1,000 people will show up annually, depending on the weather and the proximity to a weekend. It goes on every year, rain or shine. Mostly shine. It’s never rained here on October 13 but for a few seconds since this event began.

Now with the original radio broadcast on an iPod feeding into a large set of speakers, we start it at 1:00, just as in 1960, and cheer at appropriate times as if it’s happening live and the outcome is unknown. We eat hot dogs, display memorabilia and just talk baseball. It’s a fun day, although not everybody understands. Passersby shake their heads and smile wryly at the goings-on. My own daughter has described the event as “just a bunch of old men listening to a tape.”

A famous photo and an ejection

It’s been 61 years since game seven. Through attrition,the event has lost a lot of folks, including Finkelstein, who were old enough to remember the game or were even there. In the early years, I heard many good stories. I have enough to type another 10,000 words but I’ll leave you with just two.

One year, a man named Don was hawking prints of the famous Sports Illustrated photo of Mazeroski’s homer. You know the photo — the two-page spread with a view of the entire field from behind home, “Maz’s” swing, the big scoreboard, left fielder Berra watching the ball in flight. Don told me he had written to Sports Illustrated after the photo ran, asking for the original negative. Essentially he said, you’re just going to throw it in a drawer and forget about it anyway, so why not give it to me? A few days later an envelope arrived with the negative, free of charge. That was certainly a different time.

Another man whose name I’ve long forgotten — I’ll just call him Al because it’s easy to type — was at the game. After Maz’s home run, the biggest spontaneous celebration the city had ever seen was going on, tying up traffic for hours.Yankees broadcaster Joe Garagiola, trying to get back to the Yankees’ hotel with no prayer of catching a taxi, approached Al. Al offered him a ride. After fighting traffic, an appreciative Garagiola invited Al inside to a suite where the Yankees were having a postgame party before departing. Once inside, when it was disclosed Al was from here, one of the Yankees physically ejected him from the room. “Care to guess who?” Al asked me. I said, “Mickey Mantle?” Bingo! 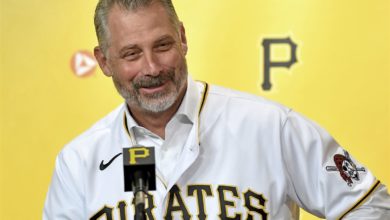