The Reading Phillies exist in the outskirts of America’s 5th most populated city in Pennsylvania, where First Energy Stadium sits quietly for 8 months of the year.

With 81 home games throughout the Pennsylvania summer months, Baseballtown, which hosts the Reading Phillies, has become a hot spot for families as well as the diehard baseball fans and has been for many years. Although the park and the team have changed names, the product that is played on the field has always been constant: Reading Phillies baseball.

The Reading Phillies: A History

The Reading Fightin’ Phils have only existed technically since 2012, when they officially changed their name, but the history goes back much farther than that.

In the late 1800’s, a team hosted by the Reading Athletic club played against various teams around the area for unofficial championships and bragging rights. After the National Agreement was signed in 1883, which started the organization of major and minor league teams in baseball, a team occupied the field by the name of the Reading Actives. 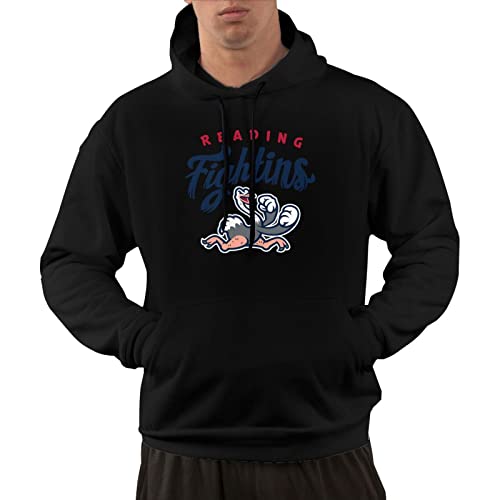 Reading Fightin Phils Hoodie
$39.99
Buy Now
We earn a commission if you make a purchase, at no additional cost to you.

They played against teams from Delaware, New Jersey, and various other parts of Pennsylvania, and was a founding member of the Eastern League of Base Ball Clubs. They existed off and on for 12 years.

Early History of the Reading Phillies

In 1897, a new baseball team called the Reading Coal Heavers was playing in Baseballtown where they played in the Atlantic League. The league disbanded in the early 1900’s but in that time, Lizzie Arlington became the first woman to play on a professional men’s baseball team when she pitched in the final inning of a baseball game against the Allentown Peanuts.

In 1907, baseball game back to Reading yet again when the York White Roses relocated to Reading and became the Reading Pretzels. A few years later in 1919, Reading began to play in the Class-AAA International League and changed their name to the Reading Coal Barons. This team was owned by the Chicago Cubs from May 1927 until the end of 1930.

In 1933, Reading’s Class A affiliate changed to the Boston Red Sox in the New York—Penn League. The Reading Red Sox as they were called made Reading their home for two years before they moved to Allentown. The next team that would inhabit Reading would be an unaffliated Class B team in the Interstate League called the Reading Chicks. They would finally become affiliated to the Brooklyn Dodgers in 1941 and change their name to the Reading Brooks but only for one year.

In 1952, the Wilkes-Barre Indians, who were affiliated to the Cleveland Indians and would become the Reading Indians. This franchise would stay in Reading until 1961 where they would relocate to Charleston, West Virgina to become the Charleston Indians.

In 1962, the Williamsport Grays moved to Reading and would become the Reading Red Sox for the second time. This team would then move to Pittsfield, Massachusetts to become the Pittsfield Red Sox. As the team moved to Pittsfield, the Charleston Indians would move back to Reading for one more year before they relocated again. Reading was without a baseball team until the 1967 season when a new Eastern League expansion team came to Reading. This team is what we now know as the Reading Fightin Phils.

Out of all of the 118 minor league teams, the Reading Phillies are the longest team affiliate in sports, being affiliated with the Philadelphia Phillies since 1967. The Phillies had decided to end their relationship with Macon of the Southern League and place their affiliation in Reading. There are several Philadelphia Phillies that have come out of Baseballtown such as Mike Schmidt, Larry Bowa, Dan Held, Jimmy Rollins, and Pat Burrell to name a few.

In 2012, the Reading Phillies changed their name to the Reading Fightin Phils. This organization loves to highlight and commemorate past members of the Phillies. The Fightin Phils has had 4 National League MVP’s that have come through their franchise, the most recent being Jimmy Rollins in 2007. They have also retired the numbers of Mike Schmidt and Ryne Sandberg, two players who are staples in Phillies history.

The Fightins have also had a change in mascots as well as names. The Reading Phillies were known to be a smaller version of the bigger Phillies, mimicking their uniforms with the red pinstripes. Although the Fightin’s still wear the red pinstripes during home games, their mascot is “the crazy hotdog vendor” who throws hotdogs in the stands between innings. General Manager Scott Hunsicker stated that the kids did not understand the old Phillies logo, and felt that the ostrich and the hot dog vendor would speak more to them, and get them more engaged to come to the games.

After all, they are selling family-friendly entertainment. Although teams have come and gone through Reading, baseball could never stay away from the town of Reading.

With the Reading Phillies being the longest affiliate in minor league baseball and sports, it is safe to say that baseball will stay in Reading for a long time, if they have anything to do with it. With the ability to provide family fun entertainment at a low cost, the Fightins always make sure put a great product on the field and provide a grea