PHOENIX – While general manager Mike Hazen and other Arizona Diamondbacks decision-makers huddle hundreds of miles away and in the midst of the winter meetings, an important decision appears finalized.

In the process of obtaining personnel, maintaining constant communication with other clubs, and figuring out how to add quality and depth to the roster, those sequestered in the Diamondbacks’ suite high atop the Manchester Grand Hyatt in San Diego continue to burn the midnight oil. As with most recent winter meetings, much is rarely accomplished. Yet, participants always maintain important steams of dialogues were opened and remain open.

Because the bullpen represents such a critical piece to determine Arizona’s fate in the 2023 season, that dimension of the club received considerable attention. Already this offseason, Hazen acquired right-handers Carlos Vargas and Miguel Castro. Both are considered an important upgrade from the 2022 wasteland.

In essence, these two players represent, at the start of the season, the seventh and eighth-inning role players. That’s because the closer appears in place with a fresh set of confidence.

This discussion was held hundreds of miles from Arizona’s activity in the winter meetings and likely that Hazen and others will not deviate or influence.

“I still see (veteran Mark) Melancon as our closer,” said pitching coach Brent Strom during a holiday charity event in Chase Field in early December. “By far, he has the best history of anybody we have. The games will dictate that, and his performance will dictate that, too. In the end, you want to match up your best pitchers against your opponent’s best hitters.”

In review, Melancon, during the 2022 season, had the least productive season of his 14 in the major leagues. In going 3-10, that represented the most losses in any season and easily surpassed the previous 4 defeats, twice (2011 with Houston) and 2014 with San Francisco). Plus, his 4.66 ERA represented the second-lowest in his career. Only a 6.20 ERA with the Red Sox in 2011 was his nadir.

Believing Melancon, who will be 38-years-old next March 28, still has a great deal in the tank, Strom has taken measured steps this off-season to assist the veteran in his quest to return to past glory.

In 2021, the season before signing with the Diamondbacks (two-year deal, $17 million with $5 mil option for 2024), Melancon recorded 39 saves and a 2.23 ERA for San Diego. That was the second most in a single season and Melancon picked up 51 saves for the 2015 Pirates. He also recorded 47 the following between Pittsburgh (30) and Washington (17).

“Melancon and I have been very close this winter,” Strom said. “We met several times. I’ve mentored him with some new ideas in his delivery and how he moves. He’s been very, very receptive. I fully expect this guy to get back to being better than where he was last season.”

For players coming off down years, the issue of motivation and the methodology of a return to past success hung over like a dark, and ominous cloud. By the end of the 2022 season, Melancon was so ineffective that he was removed from a potential closer situation and remained an outcast in the Arizona bullpen.

“(Melancon) was not happy with the way things went,” Strom said. “He’s true professional and I’m sure he was embarrassed by last year. He doesn’t want to have a repeat and that’s a highly motivated young man. You will see a different life to the ball and a different approach. I’m really bullish on what he will bring next season.”

In the effort to overhaul the bullpen, Melancon is not alone.

Despite a 22-win gain over the 2021 season for the Diamondbacks, numbers remain alarming.

For the season, they finished third in the majors in allowing the most runs in innings seven through nine. Only the Dodgers, Yankees, and Brewers allowed more runs on average, The 1.41 runs over the critical final three innings tied with Atlanta. Overall, the bullpen accounted for 26 blown saves in 58 attempts, the worst in the majors in that percentage. Right behind was the Oakland A’s, which has 24 blown saves in 57 opportunities.

All of which leaves Strom, and assistant pitching coach Dan Carlson trying to find ways to get Melancon back on the path to success. At the same time, a significant task remains to guard against dreaded mid-game meltdowns from middle relievers. 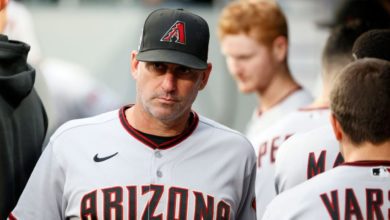