Not only did the Toronto Blue Jays trip over the start line this season, they continued to stumble and slide their way through April and May with nearly the worst record in the majors. Jays faithful had gone from expecting a pennant to wishing for a wild card to praying for a .500 season.

But then they hit the streak.

Fresh off of their longest winning streak in over 25 years, the Toronto Blue Jays have climbed back into contention in the AL East. An impressive 11-0 run lifted the Blue Jays out of the basement and right back into the fight for the division. But more than that, the streak rekindled the excitement that Toronto had felt in the offseason. All of the excitement and expectancy was renewed again since those 11 games. The optimism has returned to Toronto, at least for the time being. The streak was marked with 11-0 romps and 7-6 walk-offs. The pattern for the Toronto Blue Jays this season seems to be they win games by blowouts or they lose by one, but they have rarely been crushed by opponents this season. However, during the streak, the Toronto Blue Jays were winning those close games by manufacturing late-game runs and shutting down their opponents’ rallies in the ninth. The Jays were simply finding ways to win games and were genuinely having fun. This is in stark contrast to the Toronto Blue Jays of April who were resigned to players-only meetings and vent sessions in order to maintain professionalism on the diamond. The Jays now are winning, having fun and rekindling the optimism of the spring.

During the streak, the Toronto Blue Jays were firing on all cylinders, of those 11 wins, seven were earned by starting pitching. The impenetrable rotation that the Jays put together last winter had already been decimated by injury, but freshly acquired starters Esmil Rogers and Chien-Ming Wang earned three wins between them during the streak. Others were won by Mark Buehrle, Josh Johnson and new ace, R.A. Dickey. Notably, Dickey went nine innings in a two-hit shutout of the Tampa Bay Rays on Wednesday for his first complete game of the season, and the most dominating performance I’ve seen from him in a Blue Jays jersey. Starting pitching is proving to be an important factor in Toronto’s success this year, and the starting five will need to continue to earn wins if the team wants to see continued success for the season.

Ordinarily, the return of Jose Reyes would be a spark for a team on the rebound, but Reyes’ return from the DL has been shrouded in controversy. In order to make room on the roster, fan favourite Munenori Kawasaki was optioned to triple-A Buffalo. His onfield performance has been moderate, but his off-field actions were what really made him a joy to watch. Before the streak, I wrote about how Kawasaki represented one of the few bright spots in a forgettable spring for Toronto. While an 11-game win streak is a remarkable feat for any team, it was the intangible fun that Kawasaki brought to the table that made the streak more exciting. I am personally disappointed at his move down to triple-A, especially since the Jays are currently fielding an eight-man bullpen. The return of Brett Lawrie in the coming weeks will mark the return of another infielder, and it is a bit presumptuous to figure keeping Kawasaki around when the only infield position up for grabs is second base, with both Emilio Bonifacio and Maicer Izturis fighting for that slot.

Before the All-Star break, the Toronto Blue Jays have important divisional series against the Red Sox and the Orioles, and it will be important to go into the break with at least one divisional series win. The Jays have maintained that if they are at or above .500 at the break then they still consider themselves to be in contention. While a few more wins than that would be preferred, it isn’t unreasonable to think that .500 keeps them in contention for the post season. Consider the Oakland A’s of 2012, a team that came from .500 to earning a playoff birth.

The Toronto Blue Jays are playing like we all expected them to. It took two months to get there, but there’s reason to be hopeful again. Their big home-run bats are still there, but the Jays are finally manufacturing runs when they need to, and that’s the difference-maker in those close games they lost so often this spring. The streak has renewed our faith in the Toronto Blue Jays, but after the early season collapse, there’s reason to be cautious moving forward. Maybe the most important lesson to be learned was that we all just needed a little bit of humility, after all, you can’t simply buy 162 wins. 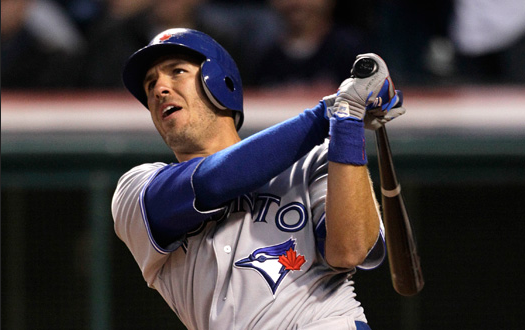 Three things for Toronto Blue Jays fans to be excited about