Minor league playoffs start soon, and the action is heating up on the field. From stellar pitching performances to the home run race, let’s look at who was the best of the best this past week.

C MJ Melendez (Royals No. 4) – Melendez has been in a battle with Marlins’ prospect Griffin Conine all year for the minor league home run crown, with both players taking turns holding the top spot. Stepping into the box Sunday afternoon for Triple-A Omaha, Melendez crushed a pitch in the second inning for his 37th homer of the year, giving him sole possession of the lead. With the season closing rapidly, can Melendez hold of a charging Conine?

OF Luis Matos (Giants No. 3) – Matos has been clutch all year for Low-A San Jose, batting .311 with 14 homers and 80 RBIs in 104 games, but perhaps his most clutch day was Saturday night. With the Giants on the cusp of playoff birth, Matos went a perfect 3-for-3 at the plate to lead the way in a 9-2 win. More importantly, the win secured a Low-A West playoff spot for San Jose, where Matos looks to continue leading the way for a deep playoff run.

RHP Hayden Wesneski (Yankees No. 15) – With Double-A Somerset looking to keep rolling in Game 2 of a doubleheader against Hartford on Saturday night, the Patriots turned to Wesneski. Wesneski responded with a 14 strikeout gem, going the full seven inning distance in a 5-1 win. The win gave Wesneski seven total in his 14 starts with the Patriots, and lowered his ERA to a respectable 4.38. A breakout performer in New York’s system this year, Wesneski and the Patriots will look to keep rolling.

OF Julio Rodriguez (Mariners No. 1) – With Double-A Arkansas looking to make a statement against Springfield, Rodriguez lead the way. Finding the seats twice in a pair of solo shots, Rodriguez found his power stroke for the Travelers. Also adding two more hits and a walk, Rodriguez reached base five times. Baseball’s number two overall prospect has slashed .351 with 13 homers and 46 RBIs in 68 games across two levels this season.

RHP Dauri Moreta (Reds No. 27) – Cincinnati has groomed Moreta to be a power reliever since they signed him as a international free agent back in 2015. Slowly working his way up the ladder since signing, Moreta was promoted to Triple-A Louisville back on July 6, and since then has been unscorable. In his 22.2 innings across 20 appearances culminating Wednesday night, Moreta has not allowed a single earned run. Moreta has racked up 18 strikeouts and opponents have batted just .136 against him. Cincinnati hopes they have another Aroldis Chapman type gem in the wings, and Moreta aims to prove them right.

RHP Tobias Myers (Rays No. 29) – Tampa Bay might be the best organization in the game when it comes to developing pitchers, and Myers is another example. The 2016 sixth round pick made his best start for Triple-A Durham Tuesday night, pitching into the sixth and racking up 10 strikeouts, including baseball’s number one overall prospect Adley Rutschman twice. Myers now has 122 strikeouts over 97.1 innings across two stops this season, and could be a sneaky addition to Tampa’s bullpen for the stretch run. 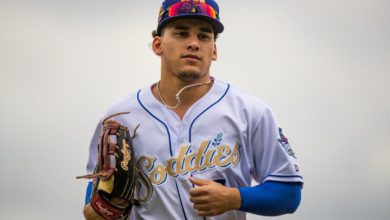